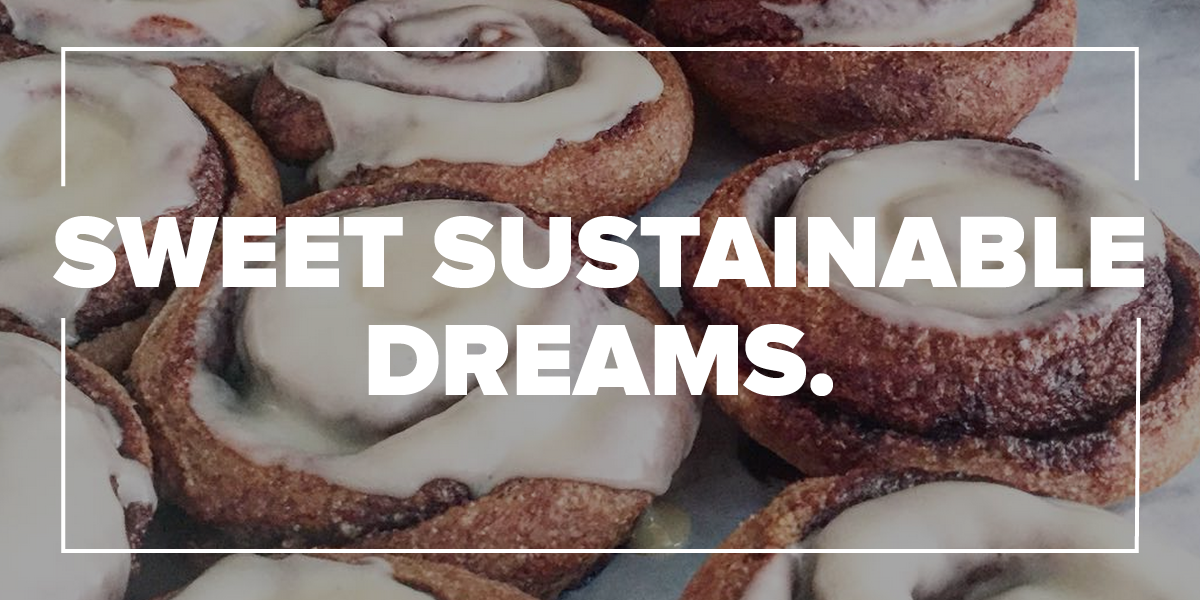 How many of you out there are bakers?

If you’re more serious about what comes out of the oven, then you’ve probably got certain brand name ingredients you always buy. Only this brand of flour. Only that brand of butter. Maybe those preferences were passed down from generations. But how many generations back?

Not a baker, just a baked good lover? Do you ever question what goes into that delicious cookie you just purchased? Could you imagine it tasting any better?

Two people, in the heart of Illinois, bakers – the serious kind – imagined they could make things taste much, much better. And thus began a series of dreams.

SOME DREAMS ARE FOUNDATIONS

In 2010, a newborn food truck with the kinds of homemade goodness you only dream about at night, (and maybe enjoy once a year at your grandma’s house, if you’re lucky) became a Chicago treasure. Hand-rolled, hand-kneaded, hand-patted, hand-sprinkled biscuits and pies transformed tastes and expectations, and within a year, bakers and husband-and-wife duo Dave and Megan Miller teamed up with a third owner to open their Logan Square counter-service bakery, Bang Bang Pie Shop.

Within a whisper, lines formed out the door, their delicious, simple concoctions gained mad respect in the local and national foodie scene, and by 2014, the Millers found themselves in Zagat’s 30 Under 30 list.

Dream come true, right? It was. A dream laced with hard work, long hours, and a crazy number of pies that didn’t make the cut (ones probably 10 times better than the average person could make). And just as they hit their mountaintop moment, Dave and Megan sold their shares to their partner, and handed in their keys.

SOME DREAMS LEAD TO OTHERS

That’s the thing about pursuing our dreams. What we hear is “dream job”. What we know is, there are actually many dreams. Dreams that lie in wait, dreams that don’t work out, dreams that were amazing, but eventually led to other dreams. And the latter is where the Millers found themselves in 2014 – at the right juncture to leave the fastlane for a bit, pursue aspirations of recreating Megan’s great-great grandmother’s recipes, and providing Chicagoans easy access to sustainable foods.

“We wanted to create a sustainable neighborhood place. A creative place where we had good jobs and good food.” – Dave Miller

The caveat? Those things required stone-milled, chemical-free grain. But even though the retail cost of a bag of stone-milled flour is roughly three times that of a name brand, the Millers’ drive to bake the best, most wholesome foods, form relationships with Midwestern non-GMO farmers, and spread the word that sustainable foods lead to better living, was worth it. As they proudly state on their website,

“A few farmers are rejecting the old way to promote crop diversity, decreased chemical dependency and higher quality grain. But they need help. They need someone in the middle – willing to pay them what it costs to grow good grain. They need someone who can mill the grain and get it to tables across America. That’s where we come in.”

The Millers buy wheat by the year instead of using the commodity exchange – buying it when crops are abundant and prices are dirt cheap. The latter suppresses the market, just like it did with coffee years ago. Now, coffee prices are higher, and it tastes better. But people never had that before. Dave said it’s the same with flour.

Dave and Megan felt they were needed. To them, it was just the beginning of a new dream. And in the spring of 2014, the twosome packed their west-Chicago bags, headed north on Western Avenue, and landed in Lincoln Square, where they opened a small, brick and mortar shop called Baker Miller – a space that previously housed, coincidentally, the flower shop where Dave bought Megan flowers for the first time.

“It was weird. We looked everywhere…we drove by and saw a “for rent” sign…which is where I had gotten her the first bouquet  of flowers.” – Dave Miller

And just like that, a newborn bakery with the kinds of homemade goodness you only dream about at night (and probably can’t even enjoy once a year at your grandma’s house) became a new Chicago treasure.

MOST DREAMS ARE HARD WORK

The process isn’t easy, though. Milling is meticulous, expensive, and laborious. What the consumer pays for the final product, is what Baker miller pays for the raw product, which has to be transported from the farmhouse to the mill. Then you’ve got the facilities. Their Lincoln Square mill, just down the block from the bakery, has a powerful air conditioner and a conveyer that moves the air 13 times every hour to minimize the dust. Most importantly, you have to keep up with demand. Baker Miller’s city mill, plus two others on local farms, churn out a collective 1,000 pounds per hour, so every little step – like pacing the pour of the grain so that it doesn’t overheat the stones and cook – are critical to the process.

However, everything is balanced with the Miller’s commitment to maintaining and providing a work/life balance. Most big industry mills run through the night, but the Millers had no intention of setting up extra shifts. They decided if they wanted to run a sustainable business, they needed to create a sustainable staff. In fact, Baker Miller now pays its employees $14 an hour, which, in this industry, is a big deal.

“We’ve got a better staff. A loyal staff. Better job security. They’re not working multiple jobs to make end’s meat. So, scheduling is easier. Their lives are easier. They’re happier when they’re here. They’re less tired. And by advertising it, we’re thinking customers will be advocates as well.” – Dave Miller

CHANGE STARTS WITH A DREAM

Seeing through the dream is paying off. Big time. The word is out. Their bread is usually gone after lunchtime, and there might be one piece of pie left by 3pm. Their eat-in menu is expanding with dishes like Dave’s The Eastman Miller (a nod to their supplier, Eastman Egg) – creamy, rainbow corn grits (house-milled, of course) with red eye gravy, Catalpa Farm’s country ham, spring onions, mint, and a soft egg – and Megan is constantly reinventing familiar sweets, like her peanut butter and jelly cream puffs, birthday cake confetti cookie sandwich, and lemon chiffon pie with preserved strawberries and a shortbread crust.

But all of that goodness comes back to the grain. In fact, the Millers are looking for a larger facility in the Lincoln Square area, so they can fulfill maybe the biggest dream of all – letting the community see, hear, smell, taste, and feel the grain that goes into their food, and perhaps turn their experience into advocacy for more sustainable growers, buyers, wholesalers and distributors.

“We want people to be able to come into the mill and see the process. When they realize what is actually going on, then they become big advocates for what we’re doing…and it only works if you’re in a neighborhood. If you’re in an obscure warehouse in the middle of nowhere, people might come to you, but we want it to be compelling. We want them to come in and be eating a piece of bread while watching the flour being milled.” – Dave Miller

You can now find Baker Miller goods in over 15 small to medium-sized grocers in the Midwest, and in all Chicago Whole Foods stores. It won’t be long before they’ll expand to nationwide distribution.

But in every display and on every label, their new mission – their dream – is visible: “We Bring Family Farmed Grains To America’s Table.”